Look at that cute Acanthostega!
Slightly surly, maybe it’s early in the morning.
He has just grown some limbs, and is fairly unsure what to begin with them.
With those beady eyes, he is looking around, for sense, meaning and purpose…
Then, little crea­ture, you have come to the right place. You are doc­u­mented by humans as having lived 365 mil­lion years ago. Because they don’t know any better. Bless them. They have invented this clever iso­tope dating method, and the more intri­cate and sophis­ti­cated, the more reli­able its read­ings must be, right? What if the cre­ator just made him extinct, 365 nanosec­onds ago? He also cre­ated eter­nity in an instant…
Sto­ries begin. 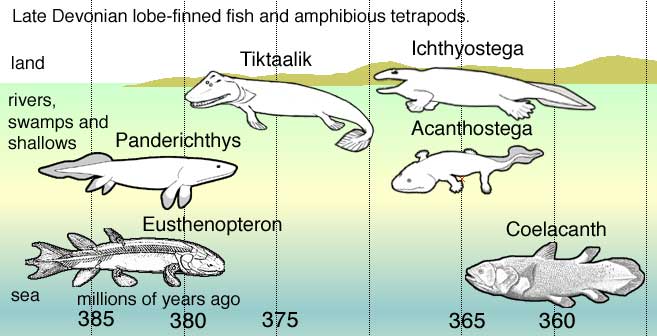 That tail was wiggly and bendy and fine to propel him along. Now he sud­denly grew these webbed little fin­gers, or knuckles, no idea where they came from. That clever salesman who intro­duced him­self as “Evo Lution” sold him these, after con­vincing him that they were all the rage: just look at that Tik­taalik! And he kept fab­u­lating about going on land, crawling, even­tu­ally walking on hind legs, upright with your shoul­ders back. Lost him there entirely. But yes, I’ll have two pairs, if you’ll let me in peace. And now what, overnight I’ve grown these, and you didn’t explain a thing other than fancy prophe­cies of glory. How about a manual? Pedual?

He will have to re-learn swim­ming with these. ‹Oh I know,› he thinks ‹I’m a bridge animal. Surely I am an impor­tant inter­me­diary step from fish-like to, what did that chap Evo say? Am-fibian? Lan­dan­imal? Now I just need to figure out what they’re up to. Up out of. Land, what is that? How do you make it? Or does it make itself? No surely it needs to come from some­where. Maybe it’s a bit like the seabed. Yes I’ve been down there, rum­maging for juicy worms and such. I’ll call myself Gunter the Lan­dan­imal now. Yes it’s aspi­ra­tional, heck yes! I got to figure this out!› ‹Sole hope, he had said. Or soul hope? What are soles anyway? The Ichtyostega is way above you, and over you! You want to lose out? Keep wrig­gling around, with no back­bone? Evo was the first sales­person Gunter encoun­tered, who lured by insults. But he had also been the first one Gunter ever met, so maybe that’s the way they do it. Gunter sternly ignores the glances he receives from his pre­his­toric con­tem­po­raries. They look like they equally bought into the schemes of this Evo guy. He’d like to talk to them, share the burden, but they seem to be caught each in their own, indi­vidual embarrassment.

Gunter has some­thing to say – maybe these new limbs extended his spirit out­ward as well: deep, murky mur­mur­ings of unfathom­able rel­e­vance, half-baked con­vic­tions about “eter­nity” and meaning, moonlit insights into silver-tongued seas that tell, without cease, to how­ever has ears to hear, truths as deep as anyone can bear. Untweet­able, the twitchy sparrow of the day does not sing of such things, the merle may, as it beholds the liquid silver of the half moon, if you find leisure and muse to listen with intent.

He has already become a living fossil, a wit­ness from an age past. No time passes when you’re deceased. Now there are sharks and lethal drag­nets anni­hi­lating swathes of his familiar seabed in a single sweep. And now he is extinct, just a quirky memory in a biology text book.

“I may be small and insignif­i­cant”, thinks little Gunter as he wad­dles clum­sily through the unknown jungle, “but I do not forget my cre­ator’s instruc­tions, to follow his path to life.” A little sun ray fol­lows the Acan­thostega as it wad­dles on.
(Ps. 119:141)

This site uses Akismet to reduce spam. Learn how your comment data is processed.